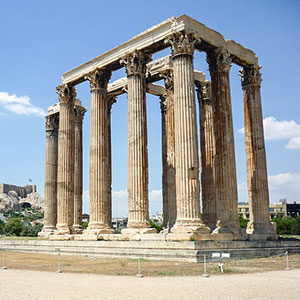 Your 7-night cruise on the Aegean Sea begins and ends in Athens. Start with an overnight and guided sightseeing to explore the Acropolis, ruins of the ancient Greek capital. Take some free time to enjoy the city before meeting your ship in nearby Piraeus. You’ll sail to Istanbul, Turkey, and spend an afternoon exploring this fascinating city with an overnight docking. On the second day of exploring, board a private tender boat for an excursion through the Bosphorus Strait between Europe and Asia, and stroll through the Spice Market in Istanbul. Sail overnight to Canakkale in northwestern Turkey-the area that includes historic Troy and Gallipoli. Cruise across the Aegean to the Greek port of Volos-where, according to mythology-Jason and his Argonauts were trained by the centaur Chiron. You’ll cruise to the island of Crete, and visit the ancient sites in Heraklion and Knossos-the center of 3000-BC Minoan civilization and fascinating Greek myths. Your ship sails on to the “Black Pearl of the Aegean”-Santorini. Join in an excursion to the clifftops perched on the volcanic caldera. Continue to the blue-and-white island of Mykonos. Explore through its blue-domed roofs, windmills, and narrow streets to shop and soak up the sun (or shade) in classic Greek style. You’ll return to Piraeus to disembark your ship, then conclude your value-minded Greek vacation with two more nights in Athens including a visit to the Archaeological Museum. This affordable vacation in Greece with Mediterranean cruise is the perfect way to explore Athens and the Aegean!

ATHENS — Athens provides a good study in how the New South coexists with the Old South. A lively music scene
(supported by students from the University of Georgia) flourishes in the bars, clubs and coffeehouses of the restored
downtown (it brought the world such bands as R.E.M. and the B52s). But you don’t have to look far to find the Old South: It’s apparent in the many Greek Revival homes and buildings that dot the city, the best example being the Taylor-Grady House. The University of Georgia, across the street from downtown, boasts a number of these Greek Revival buildings, including Demosthenian Hall and the president’s house. The university is where you’ll also find the Georgia Museum of Art (a collection heavy in 19th- and 20th-century American and Italian Renaissance paintings). Off campus you’ll find the Church-Waddel-Brumby House, the oldest surviving residence in the city, now serving as the visitors center. Athens is also home to the fragrant State Botanical Gardens of Georgia. Nature trails wind through the gardens of native flora — the rose garden is especially nice (it blooms May-November). Southeast of Athens in Washington is the Robert Toombs House, the restored home of a recalcitrant Southern politician who hated the North for political reasons and hated the Confederacy almost as much for not electing him president. One of the least mellow individuals the smooth-as-silk South has produced, Toombs never gave up his secessionist fervor or his cantankerous manner. 66 mi/106 km east of Atlanta.

Turkey is a great country to visit. The Turks are mostly overwhelmingly friendly to foreign visitors, the cuisine is frequently excellent, the cities are dotted with majestic old buildings and the countryside is often worth a good old-fashioned gasp. There’s an enormous variety of things to see and do ranging from water sports to mountain trekking, archaeology to night-clubbing and river rafting to raki drinking. Whether you leave Turkey with magnificent carpets, amulets to ward off evil, belly-dancing tips, an appreciation of its history, or just a tan, you’re likely to want to go back for more.

The famous city of Istanbul stands where Europe meets Asia and where East meets West, with all its magnificence, and signs from its far-reaching past. It has such a location that it constitutes not only a city of history, but also one of natural beauty beyond example. Extending on the two sides of the Bosphorus bordered by green groves, it also possesses beautiful shores along the internal Marmara Sea. Facing the city there exists small, pretty islands, adorning this big sea, Iying in the middle of the region. The sea features the land in that the climatic characteristics of the Black Sea influencing the north of it, is separated from the typical Mediterranean climate prevailing in its south. Rainfall is high enough to facilitate growing a variety of fruits, while snowfall enlivens the winter holidays. Indeed, it is Istanbul’s variety that fascinates its visitors. The museums, churches, palaces, great mosques, bazaars and sights of natural beauty seem inexhaustilbe.

Istanbul is also an international art and cultural center. In fact whatever intrigues your heart and mind can be discovered in this city where time lives on.

Mykonos is the most chic and sophisticated of all the Greek Islands–instantly recognized by its glittering crescent of white-washed houses lining an azure bay. The beaches here are unspoiled and inviting, especially along Plati Tialos Bay. Miniature churches, lazy windmills, and tiny cafes serving up Greek specialties line the streets. Sample the freshest squid or lobster just snatched from the blue Aegean Sea, or shop for typical flokati rugs.

Volos is a modern port, 110 miles northwest of Athens. See the museums and countryside. Mt. Pilion forest is not far off.

Prices are per person, land or cruise only, based on double occupancy. Offer subject to availability and change without notice. Some restrictions may apply. Please ask us for details.

Charges not included in the land vacation price: airfare to and from the start of your vacation; airline baggage fees including checked and/or excess baggage fees; Federal inspection fees for the Federal U.S. Customs and Immigrations; agricultural tax; other per person taxes imposed by government entities; applicable cruise taxes, fees, fares and port charges; passports; visas and vaccinations; transfers; tips to your Tour or Cruise Director, Local Host, driver, Local Guides, and/or ships’ crew; gratuities on ferries, trains, and cruise ships; laundry; telephone; minibar; alcohol, beverages, and food outside of the contracted menu as presented at a hotel or restaurant (these extra items will be billed to you before leaving the hotel, ship, or restaurant); additional excursions and activities not listed as ‘included’ in the itinerary; porterage at airports or train stations; Travel Protection premiums; and all other items of a personal nature.

Click on the buttons below to request a quote on this deal or contact us directly with further questions or comments.

Request A Quote Send To A Friend Have A Question? Contact Us

Send To A Friend

Please don't close or refresh the page while we are processing your submission
Please be patient, this could take a few minutes.